Daniela Engert
EIDE driver with support for Intel, VIA, Ali, SiS, CMD, Promise, Cyrix, HPT, AMD, Artop,SMSC, ServerWorks, Opti, Nvidia, NatSemi, SiliconImage, ITE, and ATI chips, SerialATAand generic busmaster support for all SFF-8038i compliant chips.
Supposed to work with drive capacities up to 2TiB, tested with drives up to 160GB, up to 8 EIDE channels.
Now with enhanced S.M.A.R.T support.
This driver, taken for granted, plays one of the most important roles into the OS/2 historyand without its developing surely the operating system would not have survived: has allowed OS/2  supporting new hard drives and storage devices controllers born after the IBM end of support.
Indeed installing OS/2 was no longer possible on new hardware.
It is considered "Sacred", a milestone into OS/2 customized development.

Users will be forever grateful to the author: Engineer Daniela Engert.
This software is distributed as compressed package. You have to download and manually install it; if prerequisites are required, you will have to manually install them too. 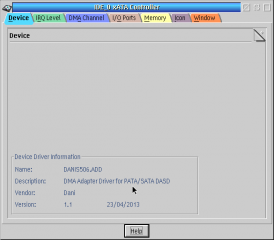 Program is distributed as ZIP package: download to temporary directory and unpack to destination folder. See below for download link(s).

Following links are to additional programs, not mandatory but useful:

Following ones are the download links for manual installation: